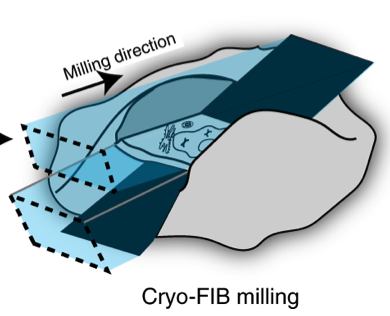 Recent advances have made cryogenic (cryo) electron microscopy a key technique to achieve near-atomic-resolution structures of biochemically isolated macromolecular complexes. Cryo-electron tomography (cryo-ET) can give unprecedented insight into these complexes in the context of their natural environment. However, the application of cryo-ET is limited to samples that are thinner than most cells, thereby considerably reducing its applicability. Cryo-focused-ion-beam (cryo-FIB) milling has been used to carve (micromachining) out 100-250-nm-thin regions (called lamella) in the intact frozen cells. This procedure opens a window into the cells for high-resolution cryo-ET and structure determination of biomolecules in their native environment. Further combination with fluorescence microscopy allows users to determine cells or regions of interest for the targeted fabrication of lamellae and cryo-ET imaging. Here, we describe how to prepare lamellae using a microscope equipped with both FIB and scanning electron microscopy modalities. Such microscopes (Aquilos Cryo-FIB/Scios/Helios or CrossBeam) are routinely referred to as dual-beam microscopes, and they are equipped with a cryo-stage for all operations in cryogenic conditions. The basic principle of the described methodologies is also applicable for other types of dual-beam microscopes equipped with a cryo-stage. We also briefly describe how to integrate fluorescence microscopy data for targeted milling and critical considerations for cryo-ET data acquisition of the lamellae. Users familiar with cryo-electron microscopy who get basic training in dual-beam microscopy can complete the protocol within 2-3 d, allowing for several pause points during the procedure.